User-defined types are objects that create new data types that can be used by other objects in the database. In PostgreSQL, it's possible to configure four kinds of user-defined types, being them: base, enumeration, composite, and range. Each type has its own set of attributes and configuration complexity and in order to provide a better explanation about them, this section was subdivided into four sections which will detail each type separately.

Base or scalar types are elementary data types used in the same way as the PostgreSQL built-in ones. Creating base types is quite advanced and requires the use of C-based functions. Details about these functions will not be covered by this documentation. 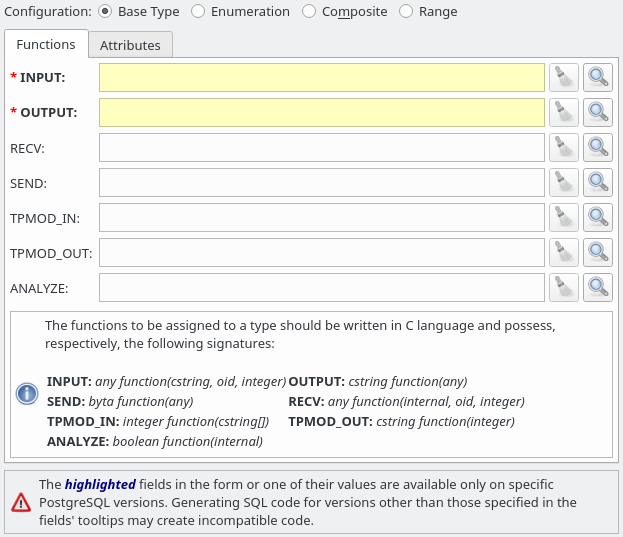 Note: Unlike the stated on the official documentation the functions INPUT, OUTPUT, RECV and SEND should be constructed using the any data type where the name of the new data type should appear. This is merely a placeholder and pgModeler will replace the any by the name of the new type being configured when running the SQL code generation.

Continuing to detail the base type, the image below shows the advanced attributes used to create a more detailed data type. Most of them aren't often used, anyway, they all will be described. 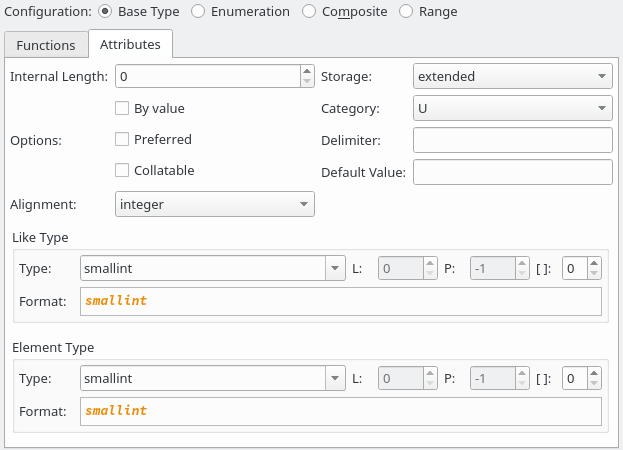 Enumeration types are data types that are composed of a static set of literal values. This data type is equivalent to the enum types existent in many of the programming languages. Its attributes are described below.

Composite types are objects which contain a set of named attributes each one with its own data type. These types resemble the structs present in some programming languages. Additionally, a composite type is basically the same as a row data type of a table but the advantage of the former is that users don't need to explicitly create a table when all that is desired is to define a single type. Composite types can be quite useful as function arguments and return types. 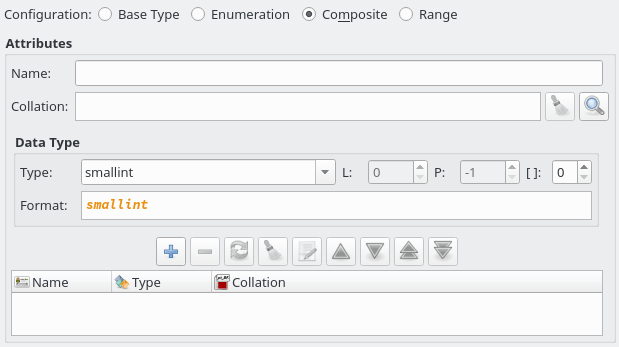 Range data types represent an interval of values of an element type (also known as range subtype). These types are very useful because they are capable to represent many element values in a single range value. In other words, range types can be used when you need to work with an interval of values without the need to create auxiliary columns to denote their start and end. For instance, let's say you need to create a range of timestamp values, instead of using two columns like start_date and end_date you can just use one column configured with the built-in type tsrange (timestamp range). This type will handle all the operations needed to compare a single value against the entire range and many other features. A complete list of built-in range data types is available on PostgreSQL manuals. 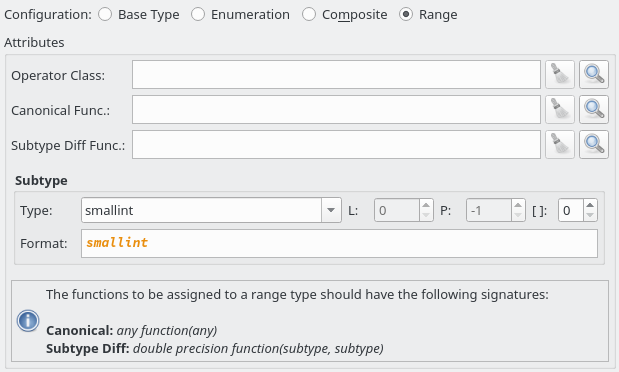