Sometimes, during the loading of a database model, an error message like the image below can be raised by pgModeler. This error happens mainly because the user ignored the model validation warnings and saved the model or loaded a file that was generated in an older version of pgModeler and contains some incompatibilities with the current version. In both cases, the file is corrupted and will be loadable again only if a set of patches are applied to the file.

Originally, this model fix feature was implemented only in the command line interface version of pgModeler but in order to facilitate the interaction with the user, a graphical interface to the command-line was implemented resulting in the dialog shown below. The only task executed by this dialog is to take an input model file (the broken one), an output file (where the fixed model will be stored), and call the command-line interface to do the fix job. The user is able to follow the whole process on the console-like field located at the base of the dialog.

It is possible to use this dialog anytime, not necessarily only on loading errors. If you have broken models and want to fix them before the loading just click the icon

on the control toolbar (at left side of the main window) to bring the fix menu and then click Model's structure. The available fields of the dialog are detailed in the table below. 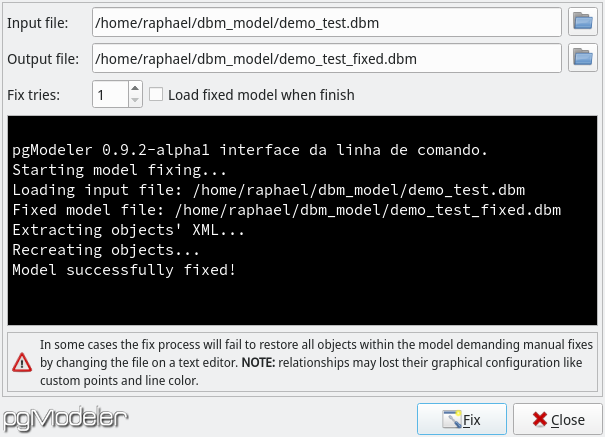