One of the most important features available in pgModeler is code generation. This process consists of translating the database model into SQL or XML code depending on the desired usage. In the case of SQL generation, there is an additional feature that is the support to different PostgreSQL syntaxes from the series 9.x and 13.x. It is a fact that compared to its prior releases the DBMS changed some aspects of the SQL syntax for certain kinds of objects and due to these updates build a code generator tool capable of creating code for a wide range of versions can be a lot difficult.

Thinking of that, pgModeler implements an internal schema micro language that is exclusively used to generate code from templates or schemas. This language is quite rudimentary and consists of simple syntactical structures that resemble the ones present in some common programming languages but on a very small scale. The reason for the micro language to exist is to avoid creating the code templates in form of raw strings in pgModeler's source code which can greatly complicate the maintenance. Another reason is that the user can change the default formatting for the generated code just by tweaking the schema files (the source code of the templates) without the need to change the source code of the software which does not require a new compilation but a single restart.

The template or schema files are the ones suffixed with .sch and stored in the schemas folder in the pgModeler's installation path. There are several usages for them as told before but specifically talking they are used to translate the model to SQL or XML, generate instructions that keep up-to- date the database in the relation to a certain database model and creates commands that are used to reverse engineer a database. You can open one of these schema files in any text editor to see how the schema micro language is used.

Before we start to describe the language's structures its important to inform some of its limitations:

The table below details all available instructions in the pgModeler's micro language and how they work.

In order to give a practical example on how the schema micro language works let's take a look on the sample code below: 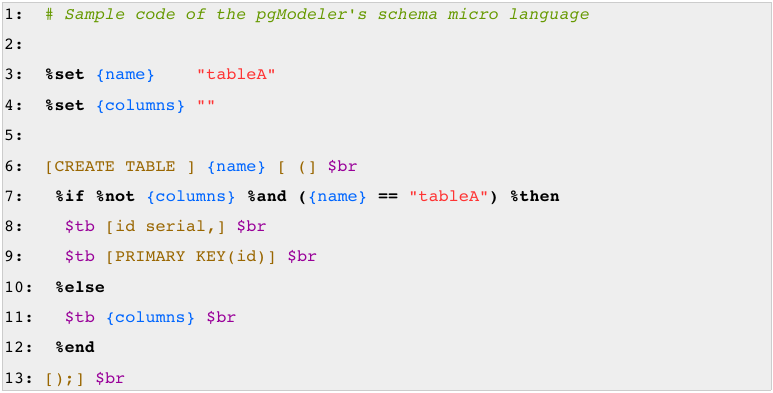 At the moment the parser starts to read the document the lines 1 and 2 are discarded because the first is a commented line and the second is empty. When it reaches the lines 3 and 4 the parser will create an attribute called name which value is tableA and a second empty attribute named columns.

Proceeding with the source code analysis, the line 5 is discarded as well because is empty. Entering in the line 6 the parser finds a plain text statement and it will output the text as it is written so the result will be CREATE TABLE . Note that additional space at the end of the statement, since the parser will not reject any character in this kind of instructions the blank space is kept. After that, the reference to {name} is found and the parser is instructed to print the attribute's value. Now, the parser will find another plain text statement and it will be outputted as ( and lastly a metacharacter $br is identified being the one that outputs a line break. The whole parsed line will look like CREATE TABLE tableA (\n (the \n indicates a line break which isn't a printable character).

At line 7 the parser finds an%if statement with a simple expression %not {columns} %and ({name} == "tableA") that can be translated as “if columns is empty and the name is tableA”. The result of the expression is true because {columns} is empty and {name} has the value tableA as the declaration defined in the lines 3 and 4. Since the evaluated logical expression is true then the lines 8 and 9 are processed as well. The metacharacter in them are translated and the plain text statement is processed as well. The lines 10 to 12 are ignored because they are the else part of the if and the parser already evaluated it.

Finally, the parser reaches the last line 13 and finds another plain text statement [);] and a metacharacter $br and translates them. Thus the whole resulting code is:

Despite the excessive usage of schema code to generate so few SQL lines the main advantage of this approach is to facilitate the code maintenance and give users the freedom to change the default formatting or even adding additional instructions to the resulting code. Currently, the tool does not offer an interface to handle schema micro language easily. The only way to play around with it is to make use of the class SchemaParser available in pgModeler's codebase, which means, code in C++ and Qt. If the user wants to go deeper into this topic contact the pgModeler's developer for additional support.